The Zimbabwe's government signed a $3.5 billion agreement on Wednesday July 29, to compensate white farmers for land that was retrieved from them.

Robert Mugabe, the former president of Zimbabwe, led a land reform program 20 years ago that forced white farmers off land that was taken away from blacks during the British rule in the country. The compensation deal is intended to rectify Zimbabwe’s long-standing conflicts surrounding the controversial land redistribution policies. Mugabe was forced out of office during a 2017 coup d’etat~Atlanta Black Star 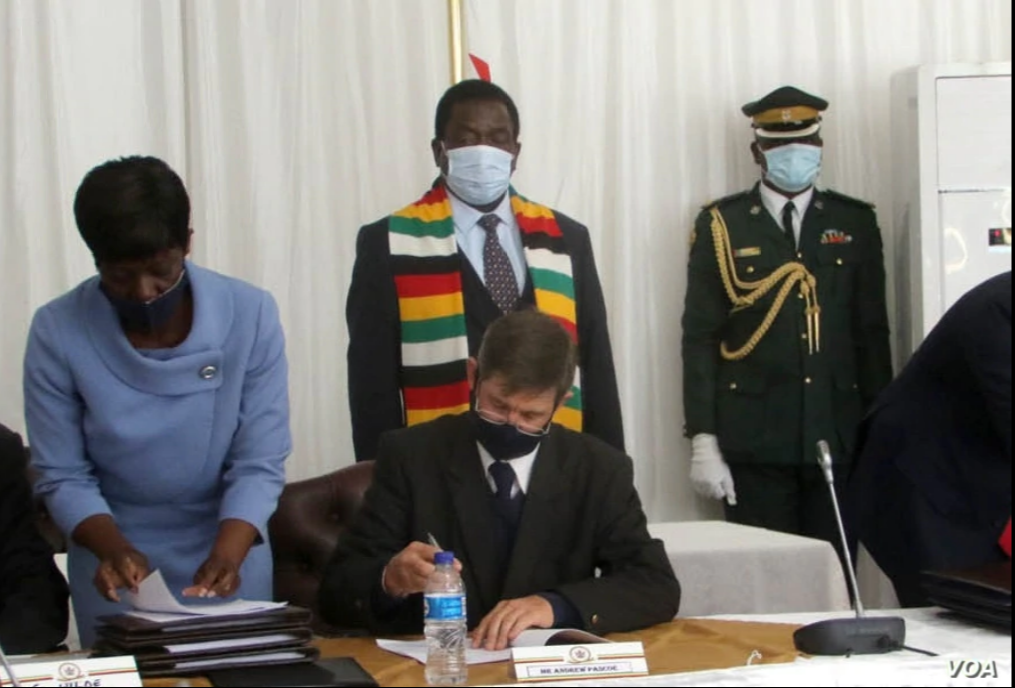 President Emmerson Mnangagwa described the agreement as historic, saying it would bring closure to an emotive issue.

Zimbabwe's President Emmerson Mnangagwa
"This momentous occasion is historic in many respects, brings both closure and a new beginning in the history of the land discourse in our country Zimbabwe," said current President Emmerson Mnangagwa, after signing the agreement at State House with Andrew Pascoe, the president of the Commercial Farmers Union of Zimbabwe.
"After almost 20 years of conflict over the land issue, representatives of farmers who lost their land through the fast track reform program and representatives of government have been able to come together to see a resolution of this conflict. To me this is nothing short of a miracle. For me it has been a dream that I will see this day," said Pascoe.

HOW WILL ZIMBABWE PAY?

The country does not have the money.

According to CNN, the country’s Finance Ministry hopes to pay the farmers via capitalization from long-term bonds on the international financial market. Perhaps, Zimbabwe believes it can kill two birds with a stone by not simply fixing issues at home but also creating room for a relationship with countries who would have been worried by the growth of China’s influence over the last decade.

China is responsible for about 75% of foreign direct investment in Zimbabwe.

The Zimbabwe government aim is to improve relationship with the West, United States and Britain who demanded Zimbabwe to return the land to the farmers.

The agreement states 50 percent of the $3.5 billion would be paid with 12 months from the day of signing, while the balance is paid within five years. The government will attempt to jointly approach International donors with the farmers to raise funding.

According to Bloomberg, Zimbabwe already owes about $8 billion to creditors, including the World Bank and the African Development Bank.

The BBC stated that between 2,000 and 3,500 white farmers were evicted. This means each farmers will eventually get and average of approximately a million dollars.

"Are our priorities skewed? In the midst of a pandemic with no doctors or nurses in hospitals. Now we jump to farmers? Yes there is an obligation to pay. Where is the money? We may sign many agreements, but this one for now looks like just an admission of intention to pay," said Robertson, a well-known critic of Zimbabwe's government.

The nation is battling inflation of more than 700%, faces shortages of currency, fuel and food, and more than 90% of the population is out of formal employment.

“It would require a dramatic improvement in Zimbabwe’s fortunes to make that possible,” said Charles Robertson, chief economist at Renaissance Capital in London.