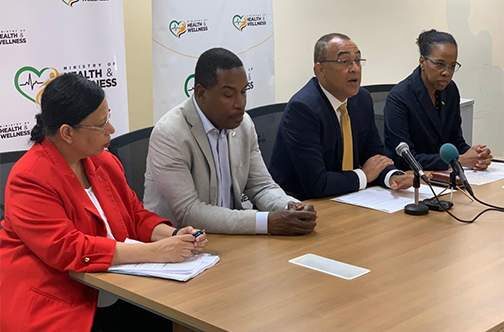 Health Minister Dr Christopher Tufton (center), along with other members from the Jamaican Medial Community address the Press

Social media was sent into panic this morning caused by the news of a patient at the University of the West Indies hospital suspected to be infected with the coronavirus. The public was scared that the virus had reached our shores.

Minister of Health and Wellness, Dr. Christopher Tufton took to social media to announce an emergency press conference that was to be held at 12:30 pm. The conference was to be streamed live on Twitter, Facebook, and Instagram. Despite the late start, many of the nation’s concerns were addressed.

The patient was declared not to have the coronavirus. According to the panel which consisted of the minister and other medical personnel, the patient’s fever and lack of the normal respiratory symptoms for the virus have out ruled the likelihood that they are infected. They stated the hospital took extra precaution and was tested for the virus solely because of the patient's recent travel history. They arrived in the island from China two weeks ago, the incubation period for the virus.

The press conference also revealed that the country is not currently equipped to test for the virus. In order to get confirmation of the virus, samples would have to be sent abroad. However, it was declared that Jamaica will soon be able to do the testing locally.

It was noted that the sample from the University of the West Indies Hosptial was not sent to be tested as the medical staff does not believe the patient is infected with the virus. The public is not privy to what they’re infected with due to privacy.

Dr. Tufton has said that he has been in communication with Chinese Officials and believe a travel advisory would be the best course of action. He is discouraging travel to and from China by Jamaicans and Chinese nationals. He said to “postpone travel arrangements”. The Minister also made it known that anyone already coming from China will be quarantined whether at home or in a quarantined facility based on the particular situation.

In the meantime, Dr.Tufton stated that airports and other ports of entry will be under surveillance.

The coronavirus has been identified in more than 10 countries so far.