According to Al Arabiya, a middle eastern news agency, the US Embassy and a restaurant in Baghdad, Iraq was hit with missiles on January 26/2020. The reports are that out of five missiles, three have made direct contact.

The missiles said to have struck an area known as the “Green Zone” which contains government buildings including the Iraqi parliament as well as foreign missions.  Time.com has reported that even though no one has claimed responsibility for the attack, the US believes "Iran-backed militias" are targeting their interests.

Time.com also reported that one US National who is a staffer, were injured, treated and has since returned to work. The latest missile attack on the embassy is said to be the third one this month. The people behind this attack is still not known and no one has come forward to claim responsibility.

There has been escalating tension between the United States and Iraq since the execution of Gen. Qassim Soleimani, the head of Iran’s elite Quds Force.  Iraq’s parliament has since voted for the American troops to be expelled earlier this month. The United States has yet to withdraw its troops.

Nevertheless, there have been continued protests among Iraqis due to internal dissatisfaction with their government.  According to Reuters.com, Iraqi’s Prime Minister Adel Abdul Mahdi has eventually resigned. He resigned “after a call by Iraq’s top Shi’ite Muslim cleric Grand Ayatollah Ali al-Sistani for parliament to consider withdrawing its support for Abdul Mahdi’s government to stem the violence.” in November of last year. However, he has yet to step down from his responsibilities and has been speaking on the recent events.

Adel Abdul Mahdi spoke against the recent attack on the US Embassy:

“the continued irresponsible, unilateral behavior harms the higher interests of the country and its relations with its friends.” He went on to say  “The government confirms its commitment to protect all diplomatic missions and take all necessary measures to achieve this,” (Al Arabiya) 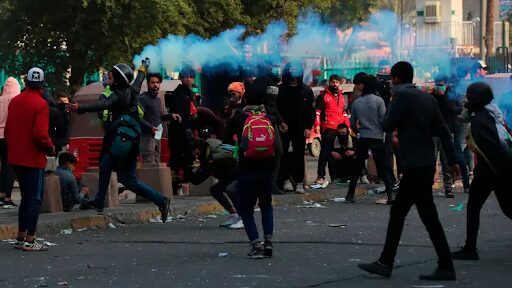 Al Arabiya reported that the protesters are now “demanding snap elections, the appointment of an independent premier and the prosecution of anyone implicated in corruption or the recent bloodshed.”

Over the last couple of months, Time.com reported that security forces have killed over 500 protesters.