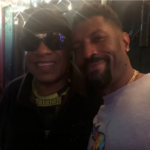 The actor who star on “black-ish” had the women on the “The Real” in stitches laughing when he explained that Wonder stole his girl. Some might say this part of the story sounded like Cole was delivering one of his stand-up comedy routines but Cole insisted the story is true

He explained on this Twitter account that he and Wonder has now made up and beef is ended.

“Stevie’s assistant and Stevie walked into this bar, and I was sitting in the cut and his assistant told Stevie, ‘Yo, there go Deon.’ He was like ‘Where?'” said Cole.

“He told his assistant to tell me to come over, and I came over and he was like ‘What’s this stuff you talking about on Instagram?'” added the comedian. “And I said ‘You took my girl, you know you did.’ And he was like ‘How she look?'”

Cole also told some of the story in an August 23 Instagram post that showed a photo of him and Wonder. And he included a part of the story that he didn’t tell on “The Real,” about Wonder wanting to fight him.

“We exchanged some more words, then he looked like he wanted to swing so I stood as close to him as possible so he couldn’t swing,” wrote Cole. “Then some other people came and calmed us down. Then we talked a little more about it and now here we are, FRIENDS AGAIN! So if you got beef with someone, just talk it out.” 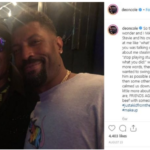