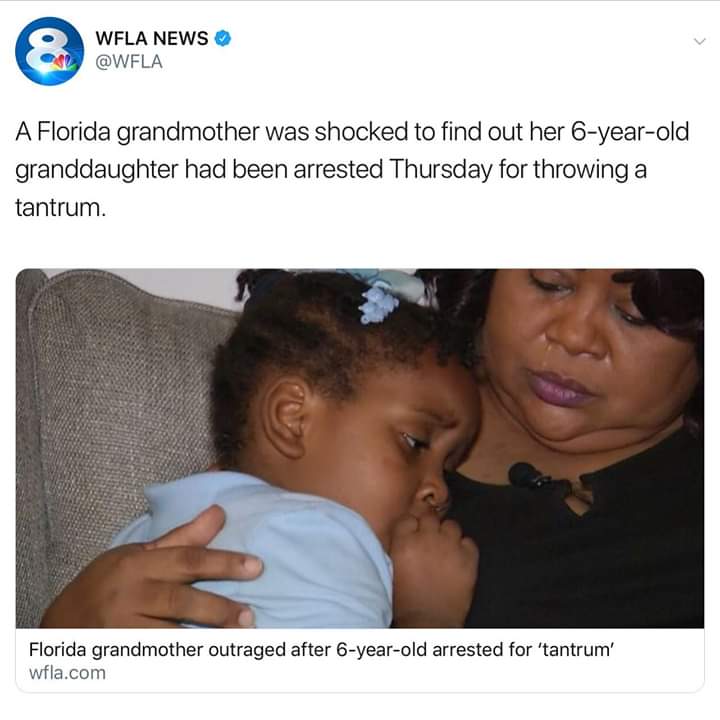 Florida grandmother, Meralyn Kirkland was shocked when she received a phone call on Thursday, September 19, telling her that her 6-year-old granddaughter, Kaia Rolle had been arrested.  She immediately asked, “What do you mean she was arrested”? She was told that “there was an incident, and she kicked somebody, and she on her way.” Ms. Kirkland relayed her experience, in an Interview with News 6 Orlando.  Ms. Kirkland stated that she told the officer, that her granddaughter was suffering from Sleep Apnea, and that was most likely the cause, of Kaia’s outbursts. To which the officer responded “Well, I have Sleep Apnea, and I don't behave like that.”

Kaia is a first grader at Lucious and Emma Nixon Academy.  According to reports, Kaia was acting out, in class. She was subsequently sent to the principal's office. The report stated, a staff member grabbed her wrists to calm her down, and this is when Kaia allegedly kicked, the staff member. The school resource officer was called, and he arrested Kaia.

6 year old Kaia, was then handcuffed, put inside the back of a police car, and taken to a juvenile detention center. She was then booked, just like any other criminal defendant, she was fingerprinted, had a mugshot taken, and charged with a battery.  Ms. Kirkland explained that when she arrived at the juvenile detention center to pick up Kaia, she was told “we would have to wait a few minutes, because Kaia was being fingerprinted. "It hit me like a ton of bricks", Ms, Kirdland said. She was outraged that a simple tantrum by a little girl resulted in such a traumatizing experience, for her granddaughter, and her family. “No six year old, should be able to tell somebody that, they had handcuffs on them, and they were riding in the back of a police car, and taken to Juvenile Detention Center, to be fingerprinted, mug shot.”

According to News 6, officer, Dennis Turner, is now suspended and being investigated by internal affairs.

Kaia is back home with her family, has an upcoming Court Date, for the battery charge.