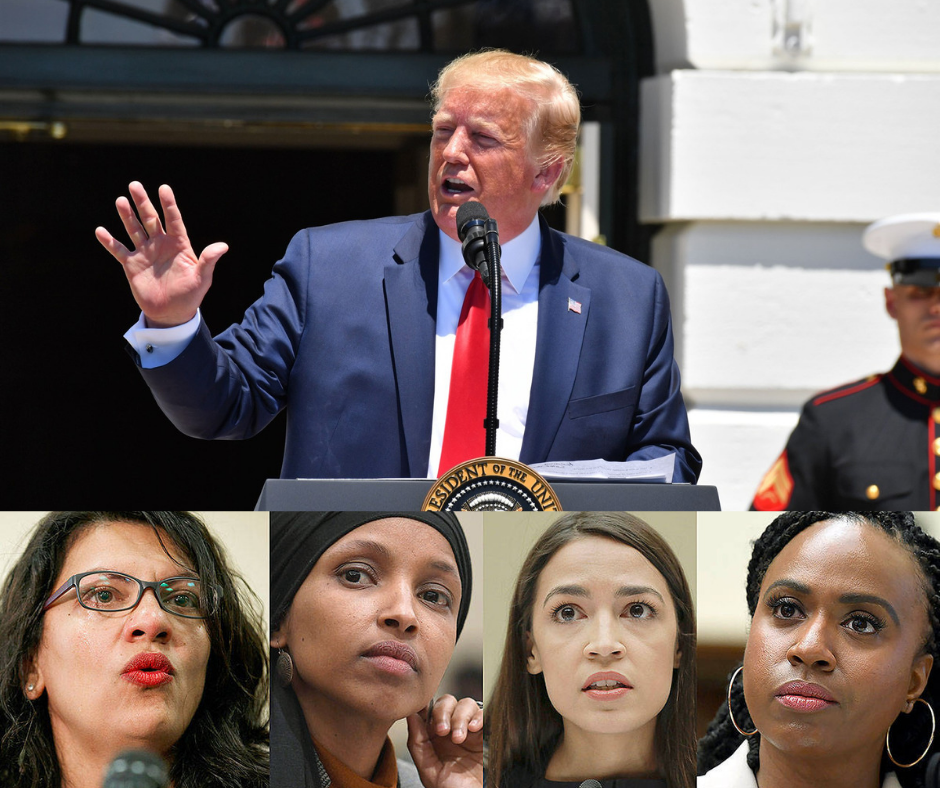 President Donald Trump speaks on the South Lawn at the White House on July 15, 2019.

He echoed the argument that the four Democratic Reps. Ilhan Omar of Minnesota, Alexandria Ocasio-Cortez of New York and Ayanna Pressley of Massachusetts, Rashida Tlaib of Michigan — the president mentioned two by name, said "should leave".

Contrary to reports of the president doubling-down on his argument, this seem not to be the case. The president instead, told the women to apologize to him and the American people.

On July 14, 2019 the president cause a political firestorm, one of his many, when he tweeted the four Democratic Congresswomen should go back to where they came from. He describes their "countries whose governments are a complete and total catastrophe, the worst, most corrupt and inept anywhere in the world (if they even have a functioning government at all)" 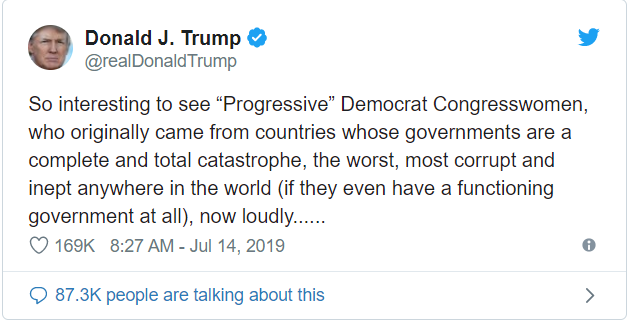 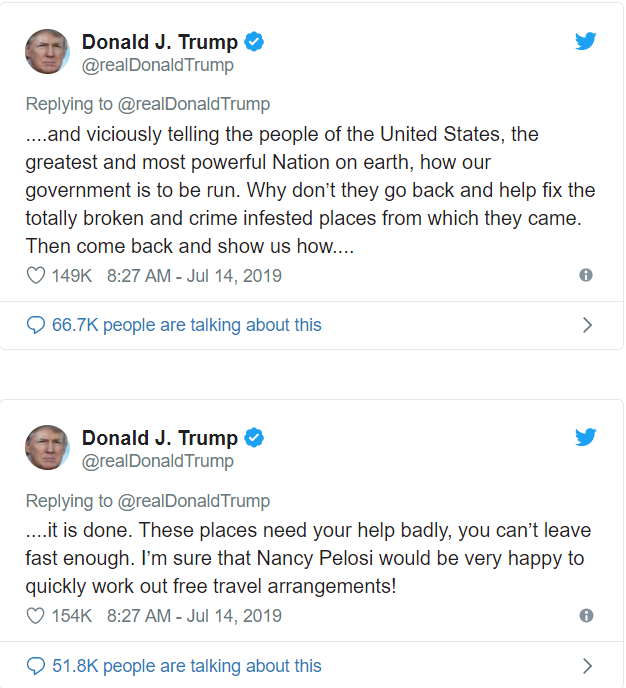 Trump’s racist Twitter tirade about “the Squad,” explained: Vox .According to the website, Donald Trump has a decades-long track record of racism that includes everything from calling for the execution of innocent teenagers to breaking fair housing law. This fact about him drifts on and off the news agenda, but he put it squarely back on over the weekend with a few tweets that exhorted four new Democratic members of Congress to “go back” to the “corrupt” countries they are from.

The president told much of cheering crowds after a reporter pose the question to him, he reiterated his argument, "if you are not happy here you can leave". He went on to say, that "all the do is complain". He claim a lot of people loved his statement.

The crowd cheered and clapped as the president told reporters, "they are very unhappy". "These are people in my opinion hate our country", that is my opinion. He told the reporter to be QUIET QUIET.

He accused the four congresswomen of "hating" the United States and saying they should feel free to leave the country if they're not happy here.

"These are people who in my opinion hate our country," Trump said at a "Made in America" event outside of the White House.

"All I'm saying is, if they’re not happy here, they can leave. There will be many people who will be happy," Trump said.

Trump accused Omar of being somebody who "hates Israel" and "hates Jews, hates Jews. It's very simple." He singled out Ocasio-Cortez for helping to scuttle Amazon's plans to build a second headquarters in New York. "It's really hurt New York," he said. "That was a terrible thing she did."

Earlier in the day he took to Twitter to demand the women apologize to the country for "foul language" and "terrible things they have said."

"When will the Radical Left Congresswomen apologize to our Country, the people of Israel and even to the Office of the President, for the foul language they have used, and the terrible things they have said," Trump tweeted Monday.

"So many people are angry at them & their horrible & disgusting actions!" he added.

He argued that political can't be afraid to take them on. According to the president, if the Democrats want to gear their wagons around these four people they will have a tough election because he do not think the people of America will stand for it. He said the voters will decide.