The Japanese government in no simple terms asked Kim Kardashian to reconsider using the name "Kimono" for her shapewear clothing like.

Finally I can share with you guys this project that I have been developing for the last year. I’ve been passionate about this for 15 years. Kimono is my take on shapewear and solutions for women that actually work. Photos by Vanessa Beecroft.

The Tweet quickly drew negative feedbacks with many Japanese telling her not to use the name. 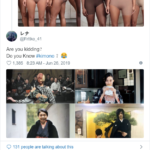 Initially after the backlash, Kim Kardashian tried to ignore the controversy by telling The New York Times she wouldn’t “design or release any garments that would in any way resemble or dishonor the traditional garment.”

“I understand and have deep respect for the significance of the kimono in Japanese culture,” but made no plans to change the name, Kim said.

Among the immediate responses was the Japanese government. They wrote an official response to Kim Kardashian.

In a letter published on the Japanese Today news website, the Mayor of Kyoto wrote:

I am writing this letter to convey our thoughts on Kimono and ask you to re-consider your decision of using the name Kimono in your trademark.

Kimono is a traditional ethnic dress fostered in our rich nature and history with our predecessors’ tireless endeavours and studies, and it is a culture that has been cherished and passed down with care in our living. Also, it is a fruit of craftsmanship and truly symbolizes sense of beauty, spirits and values of Japanese.

In recent years, we see not only Japanese but also many foreign tourists wearing Kimono and strolling around in Kyoto and cities in Japan. It is a proof that Kimono, that we are proud of as our traditional culture, is loved by people from around the world.

We are currently undertaking initiatives nationally to make “Kimono Culture”, symbol of our culture and spirits, registered to UNESCO’s Intangible Cultural Heritage list. We think that the names for “Kimono” are the asset shared with all humanity who love Kimono and its culture therefore they should not be monopolized.

I would like you to visit Kyoto, where many Japanese cultures including Kimono have been cherished, to experience the essence of Kimono Culture and understand our thoughts and our strong wish. 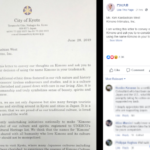 But official response from the Japanese government was too much and Kim fold under pressure. On July 1st Kim fall to the pressure and legal ramblings by announcing she will rename her shapewear line.

My brands and products are built with inclusivity and diversity at their core and after careful thought and consideration, I will be launching my Solutionwear brand under a new name. I will be in touch soon. Thank you for your understanding and support always.

I am always listening, learning and growing - I so appreciate the passion and varied perspectives that people bring to me. When I announced the name of my shapewear line, I did so with the best intentions in mind. 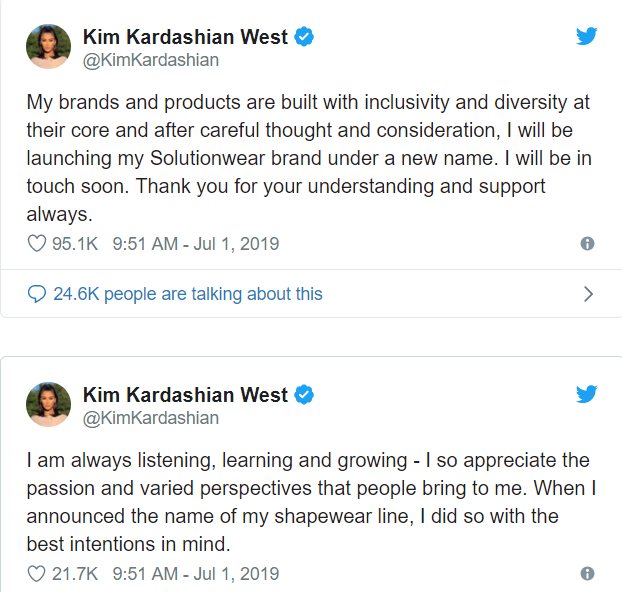 Spread the love
Posted in Live Entertainment and tagged No Kimono for Kim Kardashian.