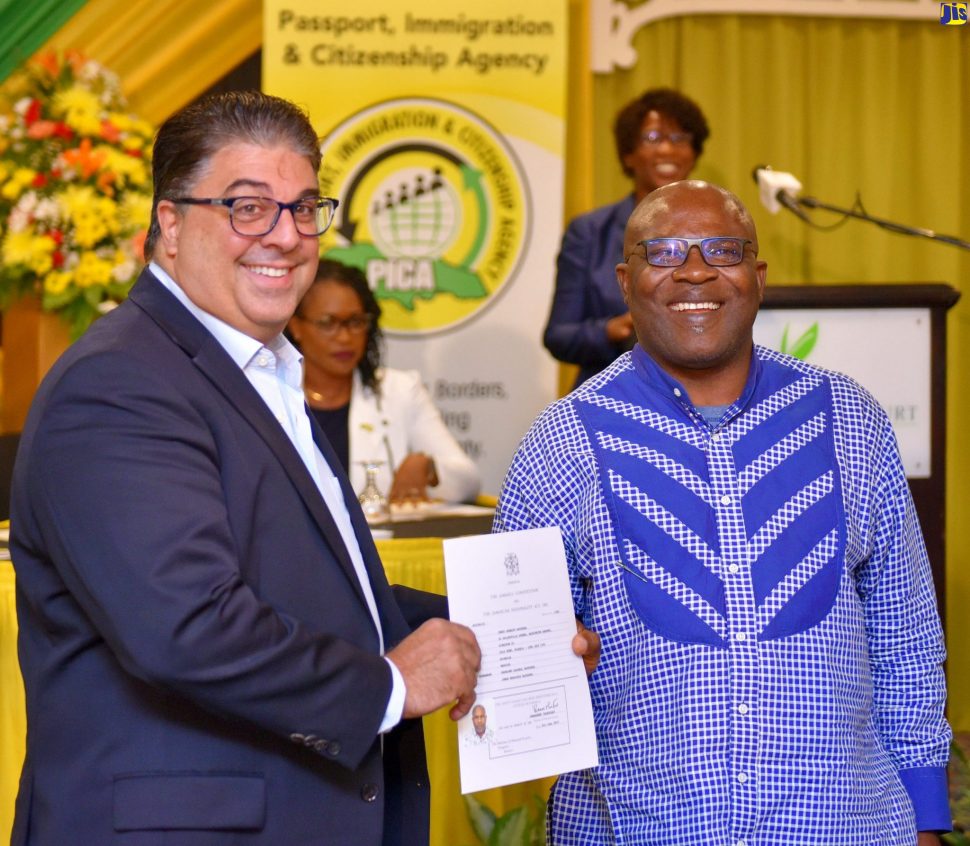 Passport, Immigration and Citizenship Agency (PICA) Advisory Board Chairman, Joseph Issa (left), presents Jerry Bayeshea with his citizenship certificate. The presentation was made during PICA’s fourth citizenship swearing-in ceremony at The Knutsford Court Hotel in New Kingston, on Thursday (June 27).

Jamaica welcomed 44 foreign nationals as citizens on June 27, 2019. This was granted by Passport, Immigration and Citizenship Agency (PICA) where 19 women, 17 men and 8 children were presented with certificates and other documents at PICA's fourth swearing-in ceremony that was held at Knutsford Court Hotel in Kingston, Jamaica.

The new passport holders are from countries around the world including nationals from Cuba, United States of America, Canada, Antigua & Barbuda, Nigeria, Hong Kong, Trinidad and Tobago, Ukraine, Philippines, Russia & more. 9 of those sworn in are descendants of Jamaicans, 11 are from Commonwealth countries, 20  are married to Jamaicans, 3 are minors registered as citizens and 1 has attained citizenship by naturalization.

Andrew Wynter, PICA's CEO, said the ceremony reflects Jamaica's national motto "Out of Many One People", stating that "as of today, you (new citizens) will enjoy the rights and privileges of born Jamaicans." He added that acquiring citizenship is "one of the highest honours a country can give a person who does not have the birthright."

He also acknowledged that the sacrifices many of the now new citizens made to be members of the beautiful island. PICA's Director of Citizenship, Carol Saunders Hammond, who presided over the swearing - in, pointed out that many of the applications PICA received for citizenship are mostly persons of Jamaican heritage living abroad, who are also able to apply locally or from the diaspora. She also noted that they (PICA) are hoping to make the service more accessible to the diaspora soon.

She added that many persons by Jamaican descent want to connect with Jamaica, their roots and contribute to the country's development. She commended this and stated that the importance of Jamaicans' total contribution, despite where they are, is recognized.

New citizen, Jerry Bayesha, who originates from Nigeria, responded on behalf of the recipients, expressed gratitude to authorities for facilitating their applications.

"We understand the importance of adding value to this great nation and, to that extent, I want to promise, on behalf of myself and other members, that we will do our best to contribute...to the social, political and economic growth of this great nation," he said.