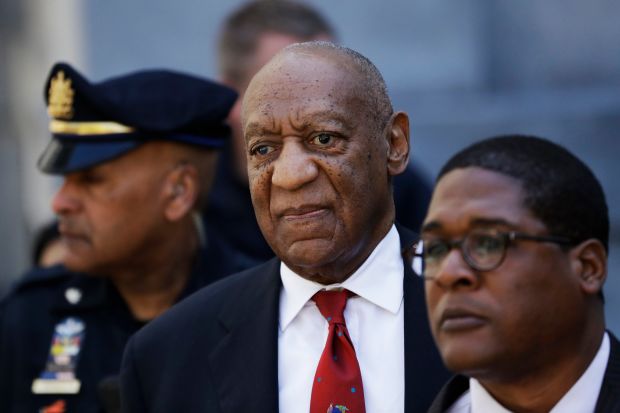 The label means Cosby, 81, must undergo counselling for life and appear on the sex offenders' registry.

A judge made the ruling ahead of sentencing the comedian for drugging and molesting a woman at his suburban Philadelphia home in 2004.

Tuesday's classification means he will need to register with state police and notify any community he lives in of his sex offender status, as well as undergo mandatory counselling for life.

The Neighbours, childcare centres and schools will have be notified of his whereabouts.

The actor's defence team had argued the state's sex offender law was too severe given Cosby's age and the fact that he is legally blind.

The disgraced comedian's two-day hearing at Montgomery County Courthouse in Pennsylvania began on Monday with legal debate over the violent predator label.

Psychologist Kristen Dudley testified on Monday that Cosby showed signs of a mental disorder and was likely to reoffend. The judge most likely ruled on this testimony.

Bill Cosby faces a maximum prison term of 10 years after an agreement between prosecutors and his defence team, but there is no mandatory minimum for the convictions.

Bill Cosby sentenced to 3 to 10 years

“I believe and think it is important to point out that this has been the most racist and sexist trial in the history of the United States,” said Andrew Wyatt, Cosby’s publicist. He claimed that some of those who testified against Cosby were "white women who make money off of accusing black men of being sexual predators.”

Wyatt also tied Cosby's verdict to the accusations leveled against Supreme Court nominee Brett Kavanaugh, claiming both were victims in a "sex war." He did not elaborate.

Wyatt later referenced the persecution of Jesus, saying, Cosby “knows that these are lies. They persecuted Jesus and look what happened. Not saying Mr. Cosby's Jesus, but we know what this country has done to black men for centuries.”

Ebonee Benson, another PR representative, read a statement on behalf of Cosby’s wife, Camille Cosby. Camille was not in court for the sentencing.

Camille’s statement decried “falsified evidence," claiming that Cosby had not been granted his right to a fair trial.

Bill Cosby's publicist, Andrew Wyatt, claims both Cosby and Brett Kavanaugh are victims of "a sex war" that is "going on in Washington today." pic.twitter.com/jRHOjzUZD7