In a video which dominated social media a couple months ago, pan-Africanist Dr. Umar Johnson, made strong claims that Jamaica is well on its way to become the first colony of China in the Caribbean.

"The Chinese pretty much owns Jamaica,” he said. “The Jamaican Government is giving concession lands to the Chinese. They are building beach resorts, they are building two schools, and what the Jamaicans have to give them in return is the right to certain lands and waterways, and if it doesn't stop, Jamaica, the land of Marcus Garvey and Bob Marley, will become the first Chinese colony in the Caribbean."

The hype around the video has since died down, and all seem to have forgotten about the issue. But as I took a trip to my hometown in Manchester, Jamaica, this past weekend, I could not help but feel like I saw more Chinese than fellow Mancunians/Jamaicans. I know this statement resonates as a little dramatic, but I kid you not! And I am not referring to our Chinese-Jamaican neighbours who have become our friendly Mr. and Ms. Chin. I am referring to what seem like a tsunami of can’t-even-speak-English Chinese, who seemed to be everywhere. 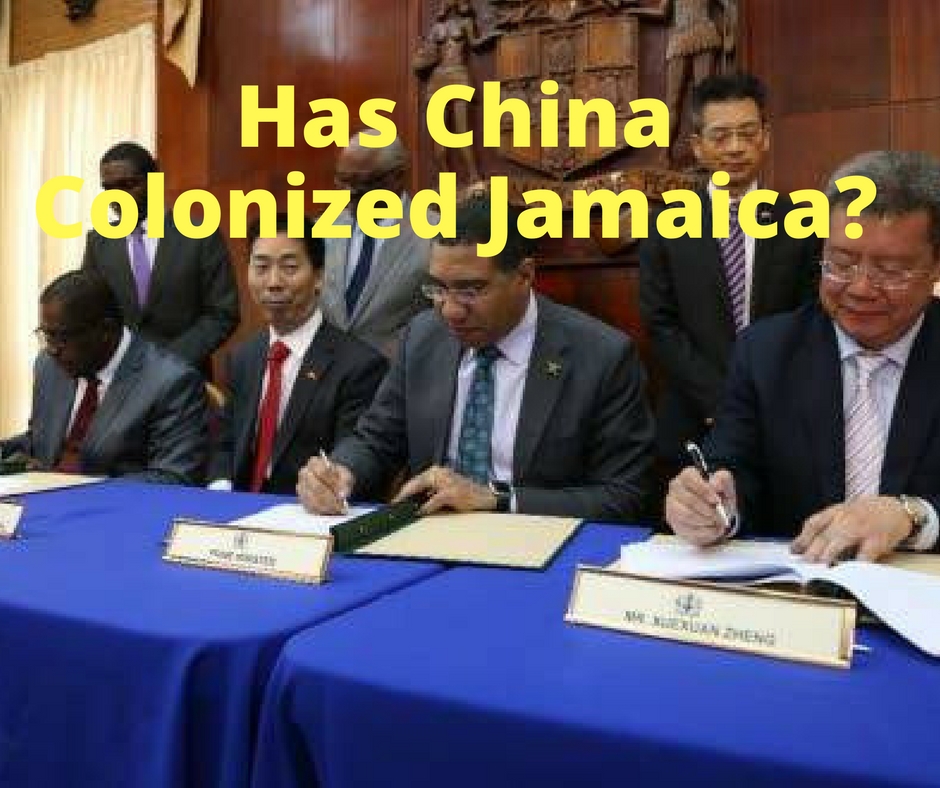 The sight should not have shocked me as much as it did, since Manchester borderlines St. Elizabeth, the home of the bauxite giant ALPART, which was recently sold to the Chinese state-owned entity, Jiuquan Iron and Steel Company (JISCo.) for US$299m. But it did concern me, as I reflected on how “involved” the Chinese have become in our beloved country.

Dr. Umar Johnson knocked the nail on the head. The Chinese have made some major investments in Jamaica, especially throughout the last decade.

The Chinese built and financed a US$730m North-South Highway connecting Kingston to Ocho Rios, reducing coast-to-coast transit time to about an hour. The project gives the China Harbour Engineering Company (CHEC), which built the highway, a 50-year concession to recover its costs from tolls. The company also received land alongside the highway to develop for residential and commercial use. Former Minister, Omar Davies suggested that the lands were “thrown in” to make the project more viable.

In 2017, we witnessed an intensive increase in trade and investment between both countries. The Jamaican Government announced that it had decided to use Chinese concessional loans to further upgrade the road network on the island. Speaking at a press conference, the Prime Minister, Andrew Holness, said that over US$300m in loan funding would come from China’s Exim Bank to construct a new road network in the southeastern and southwestern parts of the country.

Is it safe to assume that more valuable lands will be “thrown in”?

Jamaica was also banking on Chinese capital to transform PetroJam into a more efficient refinery. Sinohydro Corporation Limited, a Chinese state-owned engineering firm, was approached to finance, engineer, develop and construct the refinery upgrade at a cost of approximately US$1 billion. The political unrest in Venezuela, however, has crippled plans for upgrading the state-owned oil refinery.

The Government of Jamaica and China, in January 2017, signed an agreement for the construction of a 220-bed hospital for children in Montego Bay, St James.

In the same year, Prime Minister Andrew Holness came under heavy criticism from local architects over the decision to bypass local talent and use a Chinese firm to design Jamaica’s new Parliament building and offices at National Heroes Circle in Kingston. Some architects made their feelings known, stating that they felt insulted by the move.

The list of ‘investments’ and ‘gifts’ goes on… and on… and on.
People’s National Party Minister, Peter Bunting, had insisted that there is “a form of economic colonialism by Chinese businesses operating in Jamaica”. Bunting infuriated the Embassy of the People's Republic of China in Jamaica with a video entitled “Chinese Take Over?” in which he made several claims and arguments against the Chinese. The Chinese Embassy in response blasted Bunting arguments and said it was offended by the “unsubstantiated claims” in the video.

My grandmother always said “if it no go so, it near go so” meaning - for our readers without Jamaican roots - that if the same point keeps coming up, especially from different sources, there might be some truth to it.

I am certainly not trying to seem ungrateful for the positive and lasting contribution the Chinese have made to our development, and the doors that have opened for investment in the auto industry, computer technology, commerce, manufacturing, construction, and other major enterprise. China has gifted Jamaica a number of projects of a total value of about JMD 9.4 billion, including the Chinese Garden at Hope Gardens, the Sligoville Sports Complex and two early childhood institutes. China has donated mobile container X-ray scanners for the security of Jamaican ports, water tanks to improve water supply and will donate energy-smart products with a total value of about JMD 400 million for the benefit of Jamaican environment.

So far, China has given full scholarship to more than 200 Jamaican youths and funded the training of over 1,000 officials and professionals. (Remarks by Ambassador NIU Quingbao, Feb. 9, 2017)

Also, we have to big up the social and economic value our resident Chinese-Jamaicans have made. Think of names like Tessanne Chin, Byron Lee, Michael Lee Chin, and so many more. Not to mention the Asian-operated businesses, all offering a range of goods at cheaper rates to communities throughout the island.

So, no, definitely not trying to be ungrateful. I acknowledge the positive side of the China-Jamaica-Partnership.

However, what will these investments cost us?

It is already widely said that if America coughs, Jamaica catches a cold, in light of how indebted we are to the United States. Now, Jamaicans are being encouraged to learn Mandarin in order to compete for jobs in our own country!

Over 200 work permits were issued for Chinese technicians to complete the ALPART takeover. When it comes to construction, local contractors are unable to compete with the powerful Chinese companies, inevitably increasing the number of Chinese companies landing big contracts in Jamaica. And none of these projects seem to be hiring locals for the ‘big paying posts’.

With the current arrangements, Jamaica is simply becoming more and more indebted to the Chinese, and the Chinese are owning more and more precious pieces of Jamaica. The Jamaican Government is also well known for being “vulnerable” to countries that invest heavily, sometimes “bending the rules” meant to protect the citizens’ individual rights and overall safety, in order to accommodate big investments.

It seems like all we continue to do is switch from one bakra master to another; the most recent change being the United States, who we still owe an unfathomable amount of money, for China. When will we understand that dependency is not the way, but rather, we should aim to create a business-friendly environment in which entrepreneurship and industrialization can prosper?

From where I stand, the Chinese is not ‘taking’ over. They already have. We just don’t know it yet.